All hail the frontwoman. Lead singer, tastemaker, spokeswoman – she’s your girl. She is effortlessly cool, always exuding confidence and strength. She is sensuous without your unnecessary sexualization; she is glamour, she is punk, she is whatever the hell she wants to be. From Debbie Harry to Beyoncé, history’s most influential frontwomen have paved a way for all ladies to pursue their passions with grace (when necessary), power, and fierce resolution. We salute these women for all they have done in the music industry and beyond, and have created this series to celebrate just a few of our favorites.

“Can’t no plan play like me. I play better than a man.”

So goes Sister Rosetta Tharpe’s standard response to people who would tell her she “played like a man,” a statement wielded as both critique and compliment in equal measure. Today at Modern Girls we celebrate the life of the original soul sister, the first frontwoman, the “Godmother of Rock and Roll,” who paired evening gowns with electric guitar and launched a sonic revolution.

Sister Rosetta Tharpe, born Rosetta Nubin (or by some accounts Rosabell Etta Atkins), came into the world on March 20, 1915 with music in her blood. If talent is genetic, Tharpe’s penetrating, gravelly, blues-y voice was the gift of her vocalist father. Her flamboyant, spellbinding, absolutely soul-shaking performance style, on the other hand, was handed down from her mother—a singing, mandolin-playing, evangelist preacher for the Church of God in Christ. So many elements of Tharpe’s later star persona have their roots in this church environment that encouraged dancing in and as praise, rhythmic musical expression, and fem preachers.

At just 4 years old, Tharpe began singing and playing the guitar publicly alongside her mother as “Little Rosetta Nubin.” Two years later at the age 6, Tharpe joined her mother in her first tour across the American South billed as a “singing and guitar playing miracle.” By the mid-1920s, Tharpe and mother settled in Chicago, performing religious mother-daughter concerts at the C.O.G.I.C. church located on 40th street. As the rarity—read: oddity at the time—of a black female gospel guitarist unsettled the foundation of this new urban environment, Tharpe began to experience her first tastes of fame. In 1934, Tharpe, only 19 years old, married for the first time. Although her marriage to C.O.G.I.C. preacher Thomas Thorpe only lasted a short four years, Little Rosetta Nubin decided to keep and adapt a version of her husband’s surname as her stage name. In 1938, now Sister Rosetta Tharpe, she picks up her life and leaves Chicago for New York with no one besides her mother.

On Halloween of that year, Sister Rosetta Tharpe recorded in a studio for the first time at the age of 23. Backed by Lucky Milliner’s jazz orchestra, Tharpe dropped “That’s All,” “My Man and I,” “The Lonesome Road,” and “Rock Me,” the first gospel songs ever to be recorded by Decca Records. All four tracks—with their distinct fusion of gospel lyricism and the kind of swinging, grooving music based in more the secular genres of blues and jazz—became instant, if controversial, hits. As she began to perform her composite music in secular spaces (notably Harlem’s Cotton Club and Greenwich Village’s Café Society) alongside secular musicians within that same year, Tharpe’s fame and infamy only grew. Her performances astounded and electrified secular crowds who found themselves entranced by her fearless—and peerless—skill; while the more conservative of the religious crowd were outraged by the audacity of a black woman with an electric guitar, defiling the very name of gospel with her work.

Tharpe never let the controversy slow her down as she continued to record well into WWII, being one of the two black gospel artists who were allowed to record V-discs that were to be sent to troops overseas. A record from that era released in 1944, “Strange Things Happen Everyday” is considered to be the first real rock and roll record of all time, with Tharpe’s jumping, sweet guitar riffs underscoring the pure wit of her lyrics. “Strange Things” became the first gospel song to make top 10 on Billboard’s “Harlem Hit Parade” list (which would exist as “race records” through the late 1950s until finally becoming R&B). 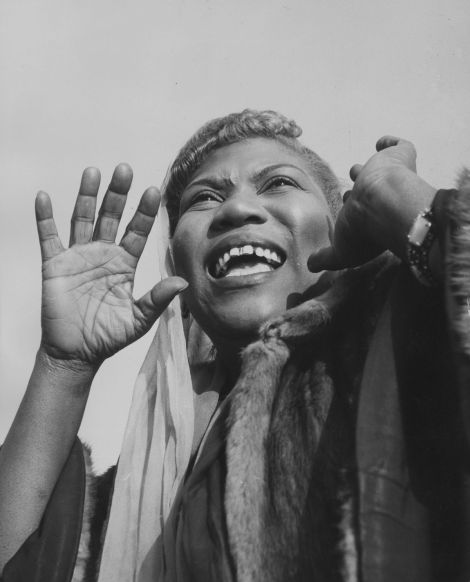 In 1946, Tharpe saw vocalist Marie Knight singing in a Harlem concert, and two weeks later showed up at her doorstep and invited her on tour. Still touring with Knight, in 1949 Tharpe formed a group of background singers known as the “Rosettes,” that she later appeared with in 1950 on Perry Como Supper Club, her first national TV appearance. Tharpe and Knight toured and lived together until around 1950, even through declining popularity, when Marie Knight decided to embark on a solo career. While the actual nature of the relationship between Tharpe and Knight is unconfirmed (like many of the specifics of Tharpe’s life), the legend goes that the two carried on a romantic and sexual relationship that was something of an open secret within the music industry.

Tharpe’s fame in peaked in the early 1950s—evidenced by the fact that anywhere from 15,000 to 25,000 fans paid to attend her third wedding to her manager Russell Morris in 1951—and steadily declined throughout the rest of the decade. In 1956, Tharpe records her last songs for Decca records and in 1957, left for England on a tour sponsored by the Chris Barber Band in order to take advantage of the British blues revival occurring at the same time. In England and throughout the rest of Europe where she stayed until 1960, Tharpe was once again treated like the rock star she was, celebrated warmly as a proto-rock and roller by fans and critics alike.

After settling in Philadelphia in 1960, Tharpe leaves for Europe once again in 1964 for a British tour as a part of the American “Blues and Gospel Caravan.” On May 4 of that year, Tharpe played one of her last shows, a concert in the rain held at a disused railway station at Wilbraham Road in Manchester. Grainy black-and-white footage recorded by Granada Television, shows Tharpe arriving in a horse drawn carriage, descending the stairs and struting towards her stage with a youthful pep that makes you forget she was almost 50 at the time. With her hair up, dressed in a white wool coat draped around her like a dream,with a matching white guitar slung around her neck, Tharpe paints a striking picture against the rain. Looking the picture of elegance and poise,  she faces audience located on the other side of the tracks and begins to shred. The years gone by never once tempered her ability to tear down a house.

This concert from across the tracks visualizes the entire trajectory of Tharpe’s career, defined by juxtapositions. Caught between the gospel truth and the secular groove, between a women’s place and a woman’s destiny, between black and white America’s, Tharpe spent her entire life denying and defying and rebelling and redefining. She was a gospel singer taking over secular charts, a black woman entering white spaces through back doors, a women outplaying her male peers at every turn. Coming at you from across the tracks, she played until you were dying to jump on over to her side.

Tharpe passed away on October 9, 1973, after suffering her second stroke from diabetes related complications and was buried in an unmarked grave. Her story remained unheard for decades, until a stream of biographies, documentaries, and rereleases reentered Tharpe into the cultural conversations of the early 2000s. In 2008, January 11 was declared Sister Rosetta Tharpe day in Philadelphia. In 2009, a grave marker was placed on her grave using funds from a charity gospel concert. In 2011, a historical marker was place at her Philly home on Master Street.

And finally, today—80 years after the release of her first collection of hit records—Sister Rosetta Tharpe is being inducted into Cleveland’s Rock & Roll Hall of Fame as an “Early Influence” in a move that feels almost astonishingly overdue. After all, so many of the rock legends that music authorities already acknowledge, from Chuck Berry to Elvis to Johnny Cash to Little Richard, all cite the Sister as one of their earliest inspirations.

Today I get to feel the honor of knowing that rock and roll was born deep in the pit of the belly and out of the life work of a woman who lived and loved and looked like me. Today I want to whisper in the ear of 13-year-old me and I want to tell that girl who felt like loving rock was in some way an affront to her blackness, that loving rock and roll is not a sin but a birthright. I want to tell her this story of this woman history forgot for so long and I want let her know that the way rock calls to her very core is just the music beckoning her home.