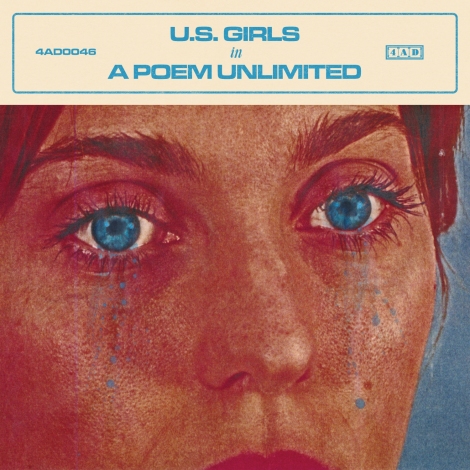 When I first heard U.S. Girls this February, I couldn’t believe she was of this decade. Her latest release, In a Poem Unlimited, is an album you’ll wish you’d heard years ago. I felt like I’d grown up with it; like I was 11, dancing to Basia and Madonna in my bedroom. The brainchild of Canadian-American musician Meghan Remy, U.S. Girls is one of those rare experimental projects that hooks you immediately. Unlike Beefheart or Zappa, you don’t need to warm up to her sound.  Remy grabs you right away with her modern-Madonna vocals and a blend of old-school disco and glam rock. She flips the often obscure genre of experimental music on it’s head – making it playful, sultry, and fun as hell. Along with her experimentation comes a deep understanding and talent for composing. Her music is almost formulaically catchy. The legendary Iggy Pop praised this talent in a 2016 interview, saying, “she can write a pop hook… but she goes beyond”. Rarely does an artist make an album with not a single dull song.  That’s exactly what Meghan Remy did with this masterpiece. She manages to craft every song into a beautiful and intricate anthem.

Another strength of Remy’s is her lyrics, which display her perception on current events. The entire album tells dark tales of disaster, war, and the consequences of violence and corruption.  “Rage of Plastics” is about a chemical refinery worker who cannot get pregnant due to her exposure to chemicals. Her single, M.A.H. (Mad As Hell), could have easily been the 80’s prom bop to end all 80s prom bops (have a seat, Phil Collins). Hidden under its disco beats is a powerful anti-war anthem. “M.A.H” describes her disdain for political leaders, comparing them to a toxic romantic relationship: “You took me for an eight year ride, though you were never by my side”. She protests American leaders’ undying eagerness to go to war, “as you were the first in line to use those bugs up high, the coward’s weapon of choice,” and then notes, “but you’ve got that winner’s smile, and you know how to leave ‘em moist,”. Here, Remy references frustration with President Obama, whose charming family-man image distracted from issues he left behind after his presidency. She shows particular disgust with the Iraq war: “Those bugs up high” are the drones the Obama administration sent to the Middle East during the Iraq war. M.A.H. makes the statement that even people we love are capable of destruction.

To understand her work, Remy wants us to look beyond the bright side. She dares her audience to consider heavy issues while contrasting them with a catchy glam-pop groove. All of her messages are hidden. She keeps her controversy coyly wrapped up, yet easily accessible once you know that it’s there. Even without these messages, In a Poem Unlimited is an absolute dream of an album. In an interview with Radio New Zealand, Remy says, “you can enjoy [my music] even if you’re not understanding the subversive element of it…  If people don’t want to do the work and go into the lyrics, at least they can still dance.”