“Forgiving who you are / for what you stand to gain,” sings Andrew VanWyngarden on the chorus of ‘Little Dark Age’, the title track of MGMT’s transcendent fourth studio album: “…just know that if you hide / it doesn’t go away.” Those lyrics, so resonant with the band’s own story, made the song a particularly fitting way to open the band’s first New York headlining shows in five years (one at King’s Theatre [3/24], two at Brooklyn Steel [3/25, 3/26]). Ever since MGMT’s early earworm singles ‘Kids’, ‘Electric Feel’, and ‘Time to Pretend’ unexpectedly became megahits, the band has been forced to compromise who they are (artists) with who people perceive them to be (hitmongers). Sure, a few catchy hooks made MGMT the unwitting champions of sports games, rom coms, and college parties, but the band didn’t want the the ironic pop songs that they wrote in their college dorms to define their legacy. What they wanted was closer to forgiveness.

Songs like ‘Time to Pretend’ were never meant to be taken seriously, but to the media, the songs’ lyrics were synonymous with the band itself: “We were victims of our own irony in a way,” keyboardist and co-songwriter Ben Goldwasser recently noted to Uproxx, reflecting on how the band’s image at the time. At their small Connecticut college, the duo would wear sunglasses and fur coats, masquerading as pranksterish caricatures of rockstardom. “When nobody was paying attention to our band and we were doing that stuff, it was obviously a funny joke. Then, as soon as we actually started getting attention, people just assumed that that was how we wanted to present ourselves and that it wasn’t a joke.”

For a while, it seemed like no matter what MGMT did, the lingering influence of their early hits – three ironic songs favored by frat bros and ESPN – would never go away. And so they hid, so to speak. After the blockbuster success of 2008’s Oracular Spectacular, MGMT put out two reactionary records (cult classic Congratulations [2010] and the more technical MGMT [2013]), foregoing Oracular’s synthpop hooks in favor of dreamy space rock. Vanwyngarden’s lyrics moved inward; Goldwasser’s compositions grew labyrinthine. MGMT released a lot of songs about depression and at least one about learning sorcery from Brian Eno. It was a natural evolution, but critics lambasted the band for being self-sabotaging and suicidal; critics dismissed anything after Oracular as an exit strategy rather than a progression. Meanwhile, ‘Time to Pretend’ continued dominating college parties and fans continued selling out MGMT shows to see ‘Kids’. The band just laughed it off.

Then, to the ire of festival-goers and delight of die-hards, MGMT cut ‘Kids’ from their setlists in early 2013. “It’s not necessarily because we don’t want to play it,” Goldwasser explained to HuffPost in 2013. “It’s more just we don’t want to play a song live if we can’t make it sound good and fit with the rest of the music.” He added: “There are a lot of people who feel they have to be very vocal about [not hearing the song] — the bro contingent, especially.” (In a recent interview with Rolling Stone, VanWyngarden clarified that the whole ‘not playing ‘Kids’’ thing got “blown out of proportion” and that the band had probably played it at 90 percent of their shows.) The famously self-parodying band still never shies from an opportunity to poke fun at their early success. At MGMT’s Brooklyn residency, the band didn’t downright omit ‘Kids’ from the setlist but rather opted to perform a ‘Kids’ “medley”. Halfway through the song, ‘Kids’ morphed into Limahl’s ‘The Never Ending Story’, and then back again. The cover served as a playful nod to how ‘Kids’ is MGMT’s own never ending story, still defining their career three albums later — but the acknowledgments to ‘Kids” legacy didn’t end there. As keyboardist Goldwasser cranked through the track’s iconic riffs, the monitor behind the band looped through campy stock footage of actor-fans feverishly jumping along. Subtle moments like this found MGMT in absolution, making the most out of songs that would otherwise feel like obligations.

The three shows’ setlists focused heavily on the band’s latest album Little Dark Age, which offers a return to the electropop sound fans associate with MGMT’s first album. MGMT played all but two of its tracks, excluding the instrumental ‘Days That Got Away’ and my personal favorite ‘One Thing Left to Try’ (an eruptive disco gem about overcoming suicidal thoughts). Middle albums Congratulations and MGMT made only a few fleeting appearances throughout the main set, with just ‘Congatulations’ and ‘Alien Days’ making the cut. Sadly, this omission made sense: Congratulations’ and MGMT’s neo-psych would have broken from Little Dark Age’s dancey synthpop momentum.

To my delight, MGMT used their encores to reward devoted fans by playing a few deeper cuts (… although arguably anything other than the “big three” of Oracular can be considered a deep cut at an MGMT show): both Brooklyn Steel performances ended with the Congratulations-era romp ‘Brian Eno’, while the Kings’ Theatre show ended with an especially gentle rendition of ‘The Youth’. On the final night, MGMT rounded out the encore with raucous cult favorites ‘Flash Delirium’ and ‘Of Moons, Birds, and Monsters’. (Coincidentally, these were the two songs I had hoped to hear most.) 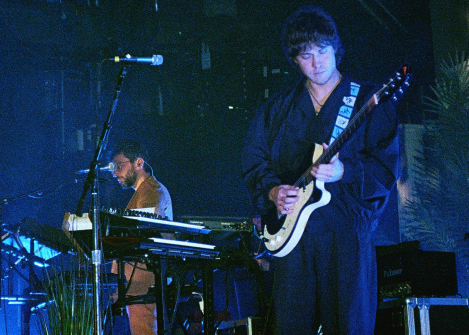 The new album Little Dark Age is a kaleidoscopic pop odyssey packed with addictive synth hooks and singalong choruses. Produced by Chairlift’s Patrick Wimberly and the band’s longtime collaborator Dave Fridmann, the record is also MGMT’s smartest and most accessible release to date. Musically, Little Dark Age draws heavily on 1980s synthpop, dabbling a little bit in goth, a little bit in baroque. It’s light, bubbly, unpretentious pop that, in excess, can grow so saccharine that you’ll risk a toothache; even the album’s most heartbreaking songs radiate an effervescent optimism.

“Welcome to the shitshow, take a comfortable seat!” VanWyngarden warns on album opener ‘She Works Out Too Much’, a ridiculously catchy number resonant of both ’80s aerobic videos and Wii Fit. With that disclaimer, he proceeds to plunge his listeners into stories of powerlessness and power, of depression and recovery, of addiction, of suicide, of death. The subjects are pretty heavy for an album that sounds like sunshine, but that’s exactly why the record works so well. “We wanted to make songs that reflected how we were feeling in the moment, and we wanted to make something that was fun because we were in bad moods,” explained Goldwasser to Uproxx, recalling how the album fell together in the months following Trump’s election. The record joins a growing collection of post-Trump releases that offer dreamlike escapism without feigning ignorance of the outside world. 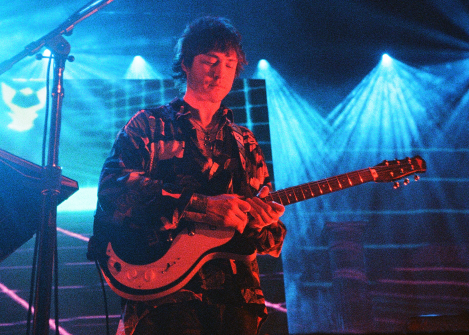 Little Dark Age‘s songs sounded even better on stage than in the recording. They swelled to fill King’s and Steel’s arena-scaled venues, the songs growing colossal in size but remaining familiar in scope. VanWyngarden’s vocals carried an enormous sweetness absent from the studio tracks, transforming the album’s disaffected melancholy into resigned acceptance. The onstage theatrics similarly breathed new life into tracks already overflowing with character: VanWyngarden rode an exercise bike for ‘She Works Out Too Much’, a silly satire of the SoulCycle generation; Goldwasser sat on the grow to play ‘When You’re Small’ on a child-side harpsichord; the monitor projected the image of a giant iPhone for the duration of ‘TSLAMP’ (or, ‘Time Spent Looking At My Phone’), its presence inadvertently mocking the hundreds of phones jutting out from the crowd to take a picture. None of the band’s visuals felt like a cheap ploy for attention, nor did they take away from the music itself. People hadn’t paid $45 per ticket for a concert; they had paid it for a show.

From the very first notes of opener ‘Little Dark Age’ to the final chants of encore ‘Brian Eno’, the rooms shifted into a twenty-first century discotheque (which is a more tasteful way of saying “rave”). While obligatory “big three” reverted the crowd into college freshman, it quickly became clear that these songs weren’t the reason that most people had come. (Granted, Brooklyn concertgoers tend to have a more nuanced taste in music than, say, frat boys in Maryland.) Fans mouthed the words to every track from Little Dark Age, responding to the album with a sense of confidence and comfort that suggested they had known these songs all their lives. They shouted for the band to play ‘Siberian Breaks’, a slow-burning 12 minute psych opus that hadn’t made the setlist. ‘Alien Days’, a number from the critically-panned album MGMT, was received like an old friend coming back from a pointless war. And yet, it was ultimately Congratulations‘ ‘Brian Eno’ that elicited the greatest cheers, the most sublime chaos.

Here I was, surrounded by beer-soaked bodies in the heart of the crowd. As I longingly looked over towards the mosh pits erupting to ‘Brian Eno’, I couldn’t help but recall an MGMT show from just a few years prior. It was 2013, and I was seeing at a seated venue in Washington, DC., where the audience sat down for nearly the entire show and silence permeated the air with such impenetrable thickness that you couldn’t even cut it with a knife. MGMT have always prioritized technical perfection over entertainment (“We’re just not entertainers,” VanWyngarden once admitted in 2010), but this focus on performance over showmanship saturated the room with tangible apathy. It wasn’t the band’s fault – their performance was true to the music they had created – but the show felt passionless. And now I was here, in 2018, tangled helplessly in a spiderweb of bodies in the ‘Brian Eno’ pit, feverishly shouting along to the lyrics I had forgotten I knew by heart, feeling like that piece of me left incomplete years ago had finally been made hole. As I listened carefully to the crowd’s triumphant echos of VanWyngarden’s final cry (“What does he know? What does he know? What does he know?”), I wished I could bottle them fresh from the air to bring home as a souvenir. I wanted to carry the energy of the show hot and heavy in my chest forever.

For years, music critics have lamented that the MGMT’s touch was long gone, that their music was a lost cause, that their shows were even worse. MGMT’s three sold-out Brooklyn shows this past week confidently proved otherwise, reminding these critics that no one can dictate the career of any band on three songs alone. In their Little Dark Age MGMT have created nothing but light. 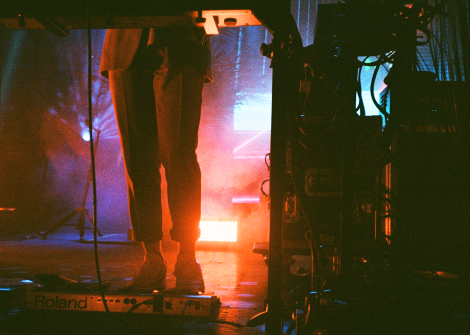 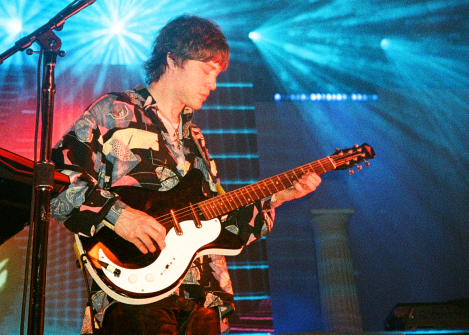 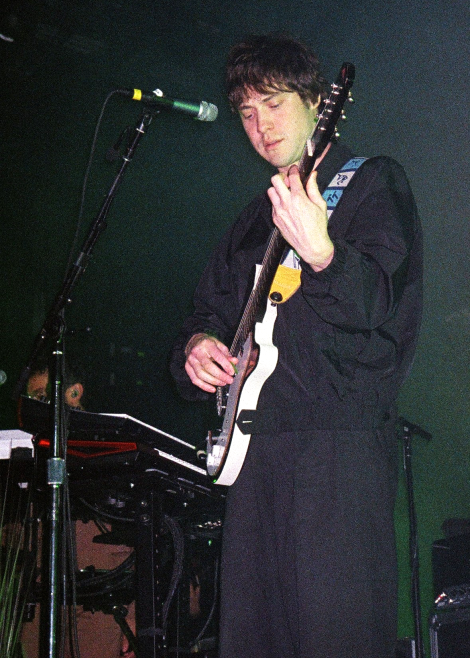 Words and photos by Megan Schaller