This is the information I have gathered from family and news sources. I’m trying my best to stay accurate but my goal is to give what I’ve gathered in a clear way, and share ways in which we can help (I don’t feel there are many right now unfortunately but staying informed is significant).

Nicaragua is on its sixth day of violent civil unrest. Last Wednesday, April 18th, protests broke out over President Daniel Ortega’s new social security reform. University students took to the streets over the decision which was not legally consulted. Ortega sent out police to stop the protests and things became violent. In the past six days, there has been tear gas, gunshots, terror and arrests into Nicaragua’s maximum security prison by the police. In the past six days, there have been at least 40 deaths. President Daniel Ortega is not taking accountability for the deaths and atrocities, but proposing that there be dialogue over the new reform. After so many lives have been lost, social security reform is no longer the point…

“We are in the streets asking for Ortega and his wife to go. This has already gone beyond the social security issue. Here there have been dead, wounded, and he does not even apologize for his killings or the savage repression against the people,” said Mauri Hernandez, one of thousands of demonstrators at a central rotunda.

Ortega is a sandinista. The Sandinistas are a radical “socialist” group that overthrew long-time dictator Anastasio Somoza in the 1970’s, but in turn, brought about a violent civil war and another dictatorship. Both sides of this war were being supplied arms by outside countries (the US + Russia). The people have always suffered as a result. My parents’ generation fled the country to places like Miami and Guatemala.

Here are details I have gathered from my cousins:

I was video chatting with my cousin who lives in Managua last night. She felt things had calmed down yesterday but minutes later she heard about more deaths. It is very hard being so far away. My heart aches for the strong students who have lost their lives and are still being detained in the country’s maximum security prison. Another cousin of mine has been going place to place bringing food and water – at one point, his supplies were confiscated by the police. Food and water for people were confiscated. There’s really no telling what will happen when a country sits on top of decades of corruption.

Source of these images is unknown. If yours, please contact us at moderngirlsinfo@gmail.com

[HOW TO HELP NICARAGUA] 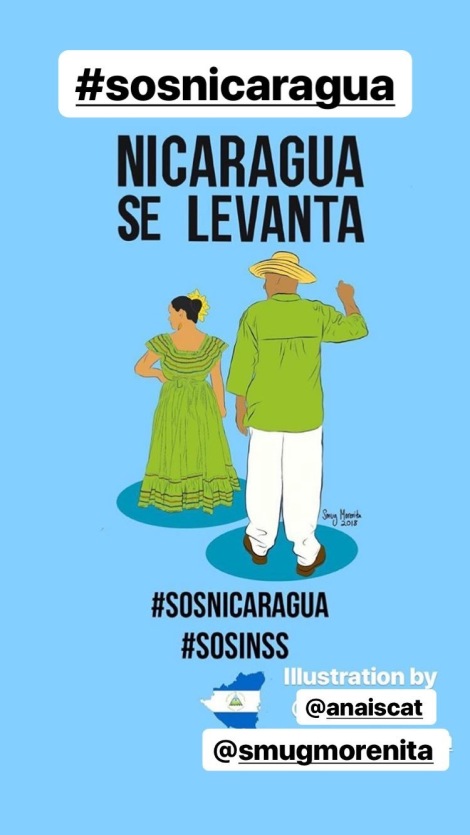 Follow Andrea for further updates on how to help.