When she isn’t in class at Northeastern, or creating doodles for her mom to embroider, Sidney Gish is writing, playing, recording and mixing her own music in her dorm room. Her latest self-release, No Dogs Allowed, has garnered glowing reviews from Stereogum, The Fader, and a 7.7 score from Pitchfork. No Dogs Allowed is Gish’s personal journey from teendom to “adulthood”, defining herself with witty lyrics (“Two-faced bitches never lie/And therefore I never lie,”) that are relatable for any 20 year old. The New Jersey native has been attending school in Boston since 2015, taking music business classes by day and creating infectious and frankly, hilarious lyrics and lo-fi bedroom rock hooks by night. After her first release, Ed Buys Houses, she took the Boston music scene by storm, playing show after show for a year straight from Allston basements to the House of Blues for the Boston Music Awards.

Now, she’s taking on a semester long internship at a record label in New York City. Still riding the wave of No Dogs Allowed, she’s playing as many shows as she can in the city before she returns to Boston for her senior year. Modern Girls brings you our conversation with Sidney Gish, where we discussed her writing process, her identity, and her admiration for Carrie Brownstein.

KRISTEN (MODERN GIRLS): How did you approach the writing process for No Dogs Allowed? Do you set aside time in between class, or just write when it comes to you?

SIDNEY GISH: I’m continuously writing, and pretty much everything on that album is what I ended up finishing. I had so many ideas that I had started, but once I finished 13 ideas I was like, OK, this is it. I’ll be writing melodies all the time, and whenever I think of one that I think is good I’ll voice memo it and listen to it the day after to see if it’s still good. Same thing with words, I’ll just write whenever I’m bored just to try and entertain myself or write down something cool that I saw in my Notes app or in my journal. If I wrote a melody and I don’t have any words to go with it, I’ll see the syllables that are in it and try to match them with words that are more interesting. Or sometimes I’ll sing whatever words go with the melody and leave it at that.

K: I just watched your WGBH performance, and the dynamics and build of the instruments is so true to the album versions of the songs. Was it hard to learn the songs for live performances or was it similar to how you recorded them?

SG: I mainly arrange stuff while I’m recording it and then I don’t think about playing it live until I schedule something after the album has come out. I try to arrange it for two track loop pedals, so I have to switch some things up. I was so nervous doing the WGBH session since I knew it would be filmed. It was really cool to do but I feel like I look really stressed out, even though it was so fun to play. It was cool to have something that I knew was being filmed like that just to see what I was doing. Live looping made the most sense, since I was always doing everything by myself, multi-tracking, even when I was younger. Multi-tracking is how I started thinking about writing songs, and looping is really the only way to do that live without having to teach other people. I eventually want to get a band but it made the most sense since I already had the loop pedals from high school.

K: There’s a lot of Regina Spektor comparisons, with your voice and witty personal lyrics. What are your biggest musical, fashion, or other influences?

SG: My fashion influence is this one Youtuber called The Milk Club. I don’t even dress like her; I just watch her videos. I’m growing my hair out because I like the way her hair looks, so she’s my inspiration in that regard. She’s so precise with things, I could talk about her all day. Regina Spektor is very cool; I’m obsessed with her and have been for a while. In high school I was so into her, and her song writing in the singer-songwriter sense since it was way more inventive than what a lot of people were doing. It always kept me interested, and she wrote from the perspective of different characters. Every singer-songwriter was writing about a break-up, and then Regina Spektor was singing about going to the store and buying a jar of pickles which is way cooler. I would just write songs about relationships problems I didn’t even have because I thought that’s what songs were about. In high school, I also started listening to Of Montreal, which is still one of my favorite bands because their song writing is really inventive melodically. It’s technically indie rock, but they put so many influences in it and it goes through so many different tempo changes. I really like Vampire Weekend too because their melodies are really strong.

K: As someone who is openly bi, does your identity play a big part in your writing?

SG: In high school, I was very into the show Glee, and then I was really obsessed with Carrie Brownstein, so then I started researching Sleater Kinney like a fiend. I found out that they started playing music at Olympia, so I started researching everything that came out of Olympia, Washington in the 90s, and watching the documentary on Kathleen Hanna on Netflix. Mainly my interest in local music was driven by riot grrrl music that I was researching on the internet and I was looking for shows to go to that were like the ones that I read about. Then I moved to Boston and there were shows like that everywhere, and everyone is still gay, but just slightly different than it was 20 years ago. I never really cared too much and then I just started being out in a very normal way, and half of the people I knew were queer in some way. It was very normal. It was never really dramatic in any way for me. I’m lucky that I had that experience. 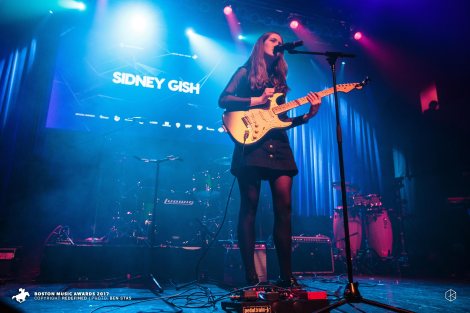 K: Who is your dream collaboration or show lineup?

SG: I would love to collaborate with Pilot Red Sun. His videos are like an early 2000s video game and his animation style is so good. I think he’s super cool and I would love to have him animate something with one of my songs. For writing, Nathan Fielder. Everything he does is just brilliant. Every joke he makes is so deeply intellectual. And just Carrie Brownstein. Also Steve Lacy, I’d love to sit with and watch him make a song on his iPhone.

K: Have you found it hard navigating the male dominated music industry, as a solo performer and as a music business student?

SG: I’m lucky in the way that it hasn’t been too bad, especially starting to play shows in a very queer music scene. Especially the shows I started playing in Boston, there were a lot of people that were queer in some way, and a lot of the bands were female or non-binary fronted. If you’re a female singer-songwriter, it gets treated like a genre. I get emails from producers who want to produce for me, but I wonder if I was a guy and went under a name that’s an all caps plural noun, if they would still be offering to produce my music. It’s really about presentation at the end of it. The whole idea of a female singer-songwriter who doesn’t use a different name being a genre is not something that I’ve found to be a huge hurtle. It’s more of a set up than a genre to be a girl who plays guitar.

K: The Boston music scene has been very warm to you. Did it take a while for that to happen, meeting the right people or did you always feel welcomed?

SG: I feel lucky about that. In the past year or so just playing shows, I’m just excited that people are into it and being supportive and I’m glad I get to play more shows and see more people playing music. I had been playing songs just at random school events since my freshman year, but I was also in an A capella group, so every time I performed it was with them, and I was beatboxing for them so it wasn’t related to my own music at all. In my second semester of that I started playing shows at random bars and then I played my first basement show in the music scene in the fall of 2016. I started playing in venues after that with more young people in bands, and released Ed Buys Houses that winter. When I got back from winter break, I started playing a lot more shows. I played almost every show I got asked to do for a year and then started spacing them out. 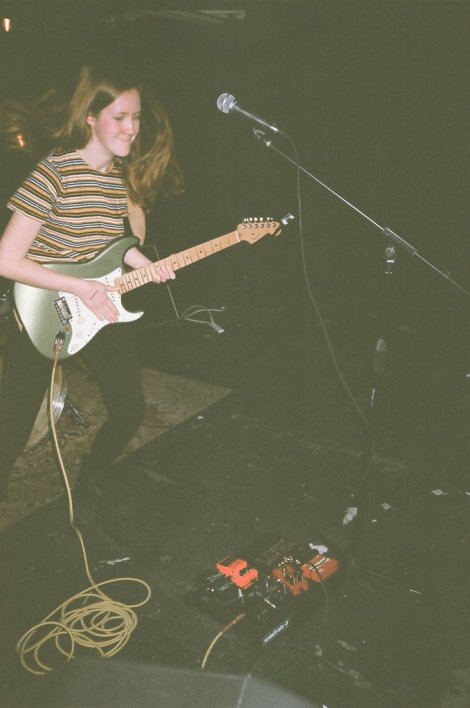 K: What does being a “Modern Girl” mean to you?

SG: Carrie Brownstein’s memoir (Hunger Makes Me a Modern Girl)  had a release date, but wasn’t out yet when I fell headfirst into my obsession with her, so I would listen to her song “Modern Girl” with Sleater Kinney. When I was going on my college tours, I was listening to that album and I remember when we were coming into Boston on I-90 before the tunnel I was listening to “Modern Girl” and the distorted effect got louder and louder through the tunnel and then we emerged into Boston. I don’t know what being a modern girl means, but I know that I am obsessed with that song and her memoir.

Check out Sidney Gish’s new album, No Dogs Allowed, on her Bandcamp, and on Spotify and Apple Music.

NYC! Catch Sidney play TONIGHT at The Silent Barn and on March 16th at Baby’s All Right!