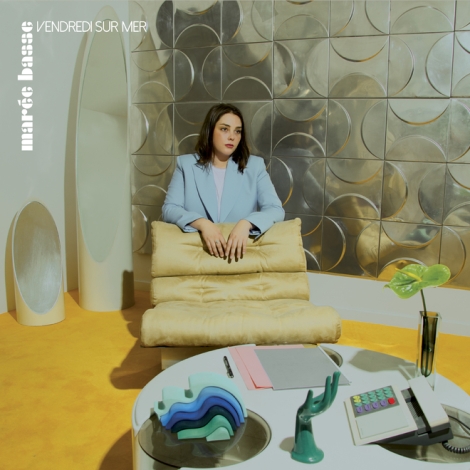 The nostalgic pop sounds of Vendredi Sur Mer come from the bedroom of Charline Mignot, one of the newest faces of the French music scene. Though Mignot comes from Switzerland, the project emphasis the certain vulnerability and truthfulness there is to being young in Paris through delicate poetry sung over early 90’s disco beats. With a word flow reminiscent of a certain Serge Gainsbourg, there is a power once again given to their essence. “My music is an assumed melancholy, an ode to fear, sadness, regrets but also to hope and envy,” she tells Vogue Paris. “I’m just trying to tell how I feel, or how I feel through things I’ve experienced.”

For a name that signifies “Friday by the Sea,” it’s notable that Switzerland is a country entirely lacking of the sea at all, yet also one where everything and everyone seem perpetually in the right place, like clockwork. Mignot still converges the nostalgia and serenity that the ocean can bring, through lines like “J’écris des chansons, je n’les chante pas (I write songs, I don’t sing them) / Et ton nom, je n’le dis pas (And your name, I don’t pronounce it) / C’est des histoires que tu t’inventes (It’s stories you tell yourself.”) The fashion world has taken a particular interest in the project, with “La Femme à la Peau Bleue” being used as the highlight of Sonia Rykiel’s Spring-Summer 2017 collection showcase.

Marée basse (Low Tide) is Mignot’s first offering to the world, with six tracks that all gradually evolve in sound and sentiment. For now, the project remains being toured around Europe, with an upcoming show at Paris’ La Gaîté Lyrique. There is seemingly no end goal, no agenda behind the music – the singer’s only desire is to help things make a little more sense than they did before. “I do not want anything, I just hope one can recognize themselves in what I’m saying.”