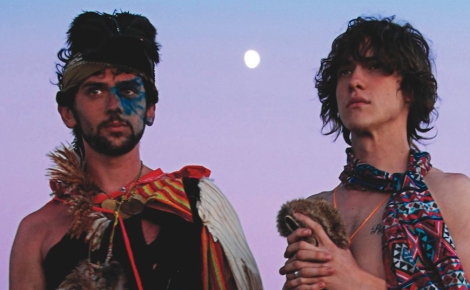 January 22, 2018 marks ten years since the first physical release of MGMT’s beloved debut album Oracular Spectacular. The album, released by Columbia Records, is forty minutes of bright, shimmering adolescence and impenetrable optimism. Its name is synonymous with the three massive singles that have since immortalized the band in 2000’s pop culture: “Time to Pretend,” “Electric Feel,” and “Kids”. Who can forget those early days just following the album’s release, when these “big three” singles were inescapable? They played seemingly on loop at coffee shops, on TV commercials, in dance clubs, at festivals, and on pre-Jersey Shore MTV. In fact, you can still find them on loop on many of these outlets because, like it or not, MGMT’s big three singles still pack a mighty pop punch ten years on.

Oracular Spectacular is the cornerstone of 2000’s psych-influenced indie synth-pop. It defined a unique musical niche (alongside contemporaries like Yeasayer, Neon Indian, and The Knife) that continues to dominate airwaves to this day. Something about the formula of Oracular Spectacular made it the perfect fuel for the explosion of indie pop/rock in mid-to-late 00’s. Perhaps it was that perfect ratio of three big singles to seven equally addictive, even more brilliant deeper cuts – or perhaps it was the attitude that it embodied, of thoughtful naivety. Oracular Spectacular is the perfect pop record, although I do wonder if it would find the same mainstream success today as it did in 2008 (in Trump’s America, it is dangerous to be so guileless). Music has changed, but the way it makes us feel has not.

A lot of the appeal of Oracular Spectacular comes from the fact that it sounds bigger than it really is. Dave Fridmann’s spacey production gives Oracular Spectacular arena-like clout – and while the tracks can easily be consumed alone, they sound especially triumphant when played at a party or in a crowd. But no matter where you hear them, the songs of Oracular Spectacular will all take you to the same place: right back to your days as an innocent, hopeful teenager, lost in your big dreams of the future and oblivious to the impossible. Understandably, that youthful optimism was the zeitgeist of 2008, a year of hope and redemption marked by Obama’s election and Britney’s post-“meltdown” comeback. Looking back, it is strangely comforting to hear something so uncorrupted by Trumpism and the cruelty of adulthood; the album is a welcome escape from the present as much as it is a nostalgic trip to the past. MGMT did their best to pepper hints that we were living in an imagined, unstable present (coincidentally, the stock market crashed just a few months after Oracular Spectacular‘s release), although I doubt anybody was listening at the time. In “The Youth” they touch on the shift that comes with growing older, growing aware: “In a couple of years / tides have turned from booze to tears … the youth are starting to change / are you starting to change?”

Oracular Spectacular was ultimately followed by two equally impressive follow-up albums, 2010’s contemporary psych masterpiece Congratulations and 2013’s experimental MGMT. A departure from the band’s sugary pop hooks ultimately granted these albums less radio airplay (especially MGMT, which receives an unfair amount of criticism for being too “bold”), but these follow-up records showcase mature, nuanced craftmanship and songwriting that is absent from the band’s fresh-out-of-college debut. Of course, that is not to discredit Oracular Spectacular: Rolling Stone named it the 18th best album of the 00’s decade (right in front of White Blood Cells and just behind Stankonia).

Stream and buy Oracular Spectacular at all the usual places – you know the drill.