While I’m all for power-hungry AI and anatomically-unrealistic aliens, it’s the social commentary that makes science fiction my not-so-guilty pleasure. The task of science fiction writers is to take the social (race, sex, religion, etc.), political (fascism, capitalism, theocracy, etc.), and technological (nuclear weapons, artificial intelligence, cloning and eugenics, etc.) crises of today and answer “what if?”. What if a hostile foreign invader attempted to colonize America? (I mean, other than white people.) What if gender did not exist? (Oh wait, it’s just a social construct.) What if we lived in a constant surveillance state? (Okay, let me make sure the NSA can’t hear this through my phone…)

Unfortunately, science fiction is very much a white, cis boys’ club. It tackles those social crises that define our world through the eyes of white, cis men. Ray Bradbury, George Orwell, and Aldous Huxley are on the curriculum of nearly every high school English program. Ursula K. Le Guin and Octavia E. Butler, on the other hand, are usually not (although props to Hulu for helping bring Margaret Atwood’s The Handmaid’s Tale back into public discourse!). When women write science fiction, they write about the world as only non white, cis men can experience it, opening conversations of gender inequality, gender identity, sexuality, race, and reproductive rights. The product of this writing is a subgenre of sci-fi that is undoubtedly feminist and disturbingly realized in our own communities.

The following are a few essentials of feminist sci-fi literature (that is, science fiction books that dissect serious woman-centric issues under pretty, sci-fi packaging) for your reading pleasure. Hopefully you’ll find one that touches something within you as they have touched countless women before. 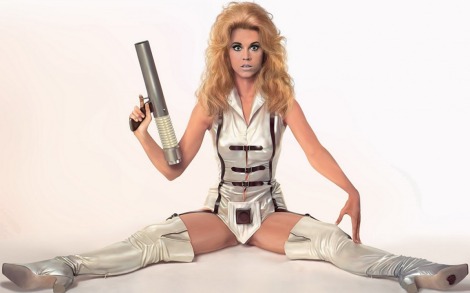 Jane Fonda as Barbarella. “Barbarella” is not quite the type of feminist sci-fi we’re talking about but it’s worth admiring her style regardless.

The Female Man by Joanna Russ

“I have no structure … my thoughts seep out shapelessly like menstrual fluid, it is all very female and deep and full of essences, it is very primitive and full of ‘and’s,’ it is called ‘run-on sentences’.”

“My mother thinks that I don’t like boys, though I try to tell her: ‘Look at it this way; I’ll never lose my virginity’. I’m a Man-Hating Woman and people leave the room when I come in it. Do they do the same for a Woman-Hating Man? Don’t be silly.”

Russ’s 70s feminist opus centers around four women living in four parallel worlds: one similar to our own earth in the 1970s, one in which the Great Depression never ended, one in a glorious lesbian utopian society where all men have been extinct for 800 years, and one in a dystopia completely segregated by sex. The title comes from a quotation by the woman from our own earth, Joanna, who believes she must forget her identity as a woman and adopt the male gender role to be respected by the men in her society. “The Female Man” challenges just what it means to be a woman as these four ladies – each with their preconceived notions of gender roles – cross into each other’s worlds. The text is provocative, haunting, and all-too-real for any person who identifies as a woman in our own society.

It is important to note that the experience of women in this novel is, for the most part, cisnormative (although the character Jael inhabits a world where young boys opt to receive plastic surgery to present as women, while still identifying as men). Nonetheless, it is still a valuable and wildly entertaining dissection of womanhood.

>>> Purchase The Female Man on Amazon.

The Left Hand of Darkness by Ursula K. Le Guin

“A man wants his virility regarded, a woman wants her femininity appreciated, however indirect and subtle the indications of regard and appreciation. On Winter they will not exist. One is respected and judged only as a human being. It is an appalling experience.”

“No, I don’t mean love, when I say patriotism. I mean fear. The fear of the other. And its expressions are political, not poetical: hate, rivalry, aggression. It grows in us, that fear. It grows in us year by year.” 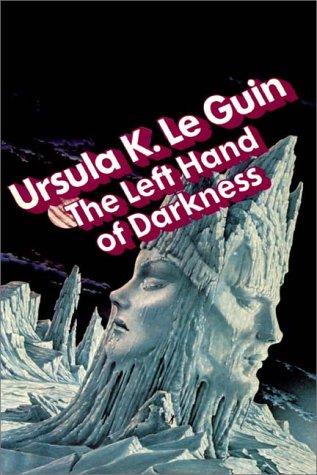 Originally published in 1969, The Left Hand of Darkness is a seminal piece of feminist literature that takes its readers to an androgynous world where gender neither matters nor exists. Without gender, the planet of Winter has no war or rape (which is yet more reasoning as to why modern gender constructs in our own world need to be shattered). Social relationships on Winter are built on loyalty rather than sexuality, which makes things understandably difficult for the protagonist, a male envoy from the earthlike planet Terra. Of course, you don’t need gender to have drama, adventure, and intrigue, all of which Le Guin delivers with delightful mastery. At the time it was written, no other novels challenged the constructs of gender with such fervor – making its widespread acclaim by critics all-the-more surprising (and validating!). The Left Hand of Darkness is the cornerstone of feminist sci-fi and an essential read for those who have ever felt constrained by traditional constructs of sex and gender (um, that means everybody).

Oh, and just in case you were wondering what “the left hand of darkness” is: it’s light. Which, then, makes darkness the right hand of light, in case you didn’t want to do the math.

>>> Purchase The Left Hand of Darkness on Amazon.

Parable of the Sower by Octavia Butler

“There’s comfort in realizing that everyone and everything yields to God. There’s power in knowing that God can be focused, diverted, shaped by anyone at all.”

“Cities controlled by companies are old hat in science fiction. My grandmother left a whole bookcase of old science fiction novels. The company-city subgenre always seemed to star a hero who outsmarted, overthrew, or escaped ‘the company.’ I’ve never seen one where the hero fought like hell to get taken in and underpaid by the company. In real life, that’s the way it will be.”

Although Parable of the Sower may appear to err on the side of fantasy, it’s still scientifically plausible (the protagonist may seem to have special powers, but they’re actually delusions of empathy brought upon by drug use). It would be remiss to ignore that its author, Octavia Butler, was the first (although certainly not the last) African-American woman to gain widespread popularity as a science fiction writer. Naturally, her body of work features strong black female protagonists – something that literature still needs more of. Parable of the Sower‘s Lauren Olamina lives in a future United States ravaged by climate change and wealth inequality (sound familiar?). It’s a capitalist society in chaos where racial and religious minorities have yet again become a scapegoat, and Lauren is sick of it. In this especially poignant dystopia, Lauren uses her “powers” of hyper-empathy to develop a new belief system – “Earthseed” – and gather a group of followers/worshipers/disciples/friends. Their goal? To leave the planet and start anew with a society based on compassion. It’s a concept so tantalizing that one can’t help but wish such a movement were happening in our own world.

>>> Purchase Parable of the Sower on Amazon.

Words by Megan, who loves both science fiction and nonfiction. Talk to her about the Fermi Paradox. Or don’t.

Images are property of their respective owners and were found via Wikipedia.