It is remiss to celebrate Pride without looking back on the tireless of work of the warrior mothers of gay liberation, Ms. Marsha “Pay It No Mind” Johnson and Ms. Sylvia Rivera. Trans women of color were, are, and always will be on the frontline of LGBTQA+ revolution. The white-washed, cis historical narrative often ignores these ladies’ contributions to gay liberation. After all, it is Marsha, a poor, black transwoman from the streets, who is attributed to throwing the first shotglass at the Stonewall Inn in 1969. Without these women, Pride would not exist. 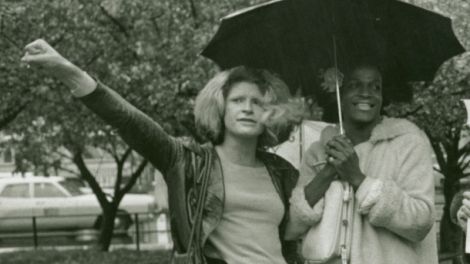 On June 28th, 1969, New York City police raided the Stonewall Inn Bar in Greenwich Village, Manhattan. It was conventional procedure for police officers to force women into the bathroom to verify their sex, and then arrest the cross-dressers. This particular bar was one of the only places in the city where LGBTQA+ individuals and sex workers, many of whom were survivors of the streets, could congregate safely. Marsha had come to the bar with her best friends, including Sylvia, to celebrate her 25th birthday. Upon being harassed by the police, the fed-up street kids of Stonewall fought back, beginning three days of violent riots that ultimately birthed the modern Gay Liberation movement. Marsha’s party was the crux of the Stonewall resistance. Trans women of color were the very force that put Stonewall on the map; trans women of color are where Pride began.

Marsha and Sylvia fought for a gay liberation that was inclusive to poor trans women of color. The “radical” organizations of these ladies’ time – the Gay Liberation Front and Gay Activists Alliance, of which Marsha and Sylvia were both members – ignored the struggles of the non-white, non-cis LGBTQA+ brothers, sisters, and siblings who had fallen through the cracks of the system. In order to create a space where trans and gender non-conforming people of color could find safety and community, Marsha and Sylvia co-founded STAR (Street Transvestite Action Revolutionaries). The women hustled for money to support their family of street kids coming out of jail and getting kicked out of their houses, ultimately pooling together their meager income to create a STAR House shelter for their kids to live.

In 1973, Sylvia Rivera delivered a devastating speech to the crowd of Christopher Street Pride. She relayed to a largely white and middle-class crowd her truth – that she had been beaten, had her nose broken, put in jail, lost her job, and lost her house for Gay Liberation. The people in the crowd, on the other hand? They hadn’t. The kids coming out of jail were not safe under the exclusive current Gay Liberation movement. Sylvia commanded that this was not a movement for the white middle class, but for ALL. The movement had failed to support poor trans women of color – and today, it continues to fail these women. Sylvia demanded change from the white, male, cis faces of the so-called revolution. Ultimately, Sylvia was boo’d off the stage, but not before gathering the crowd in an unsparing chat of “Gay Power”. For all her pain, activism, and militant strength, she was ignored.

Marsha and Sylvia are the unsung mothers of the revolution who were ignored not only by their contemporaries, but by history. These ladies’ contributions to the Stonewall Riots catalyzed the Gay Liberation movement responsible for today’s Pride. They created a safe space for homeless trans youth who had fallen through the cracks of a racist, transphobic Gay Liberation. Gay Liberation failed these heroines, but we don’t have to. We can continue their legacy by sharing their stories, celebrating their place in history, and fighting for a collective liberation. If your Pride isn’t actively against classism, trans-inclusive, and anti-racist, then it’s nothing to be proud of.

Marsha and Sylvia’s legacies live on through the Sylvia Rivera Law Project, an organization that “works to guarantee that all people are free to self-determine gender identity and expression, regardless of income or race, and without facing harassment, discrimination or violence.”