What happens when two legendary artists intersect? Expectedly one of the greatest movie soundtracks you could ask for. Seu Jorge is now on his second tour of Wes Anderson’s The Life Aquatic with Steve Zissou acclaimed soundtrack, a widely praised performance in which the Brazilian composer and songwriter has reprised his role in the film for a second world tour in tribute.

Stateside, some might be wondering why the name Seu Jorge is considered legendary or why he’d be in the same sentence as someone like David Bowie. Internationally, Seu Jorge is easily one of the most influential faces, voices and songwriters hailing from Brazil. From international break out roles in the acclaimed film CIty of God, his more noted crossover role came in the form of his role in the Life Aquatic with Steve Zissou.

His role in the film gained him notoriety extended far beyond his screen time as Pelé dos Santos in the Wes Anderson Film. He was also asked to prepare and arrange the music soundtrack for the film. A task that can already be seemingly daunting for a breakthrough artist, he was also asked to do so in the key of legendary artist David Bowie’s back catalog.

Surprisingly, Seu Jorge agreed to do so while being extremely limited on his familiarity of Bowie’s work, two songs worth of familiarity to be exact. However, what this led to and what makes the arrangements truly special is the way in which Jorge then immersed himself into every aspect of Bowie’s work. You can progressively hear the changes (quite literaly, as this was the particular song Jorge cites with his true awakening into understanding the artist that is Bowie) he undertook as an artist, and as a person, as he too became stimulated by the music of the late life-altering musician.

The resulting soundtrack are everything you’d expect when two worlds collide and Bowie meets Brazil; a tracklisting that is samba, MPB and bossa-fied so magically and translated into portuguese and stripped down to acoustics. Some of the most notable songs such as Ziggy Stardust, Rebel, Rebel and Space Oddity made the album, as well as some of the lesser known songs like When I live my Dream and Quicksand. (But can such a thing like a lesser known Bowie song actually exist?)

The soundtrack served as a tribute to a true legend, and the now tour is serving as a tribute to the now late artist and his father who both subsequently passed away from cancer roughly 13 years post film debut. It is traveling on its second leg of tour due to much acclaim, praise and support.

Whether you’re a moviephile, Bowie babe or overall appreciator of legendary music, this is an extremely special show you won’t want to miss and this Sunday will be the final show in Los Angeles, California. 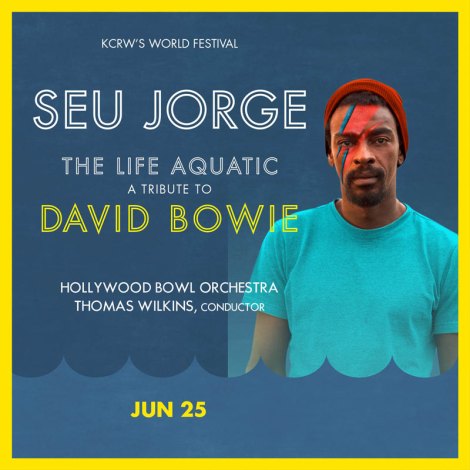 Modern Girls will be paying a visit to this momentous tour this weekend at the Hollywood Bowl in Los Angeles and we hope you all can join us. There are still surprisingly a few tickets still available for you to get you hands on and you can find them here. Be sure to give a shoutout if you are attending so you can also get your hands on some Modern Girls goodies while you enjoy the resulting night under the stars to the sounds of two legends colliding.