In solidarity, last Tuesday I attended a Black Lives Matter rally that took place at the LAPD Headquarters in Downtown Los Angeles. Inside, a commission hearing was taking place seeking to decide the fate of an officer over the fatal shooting of Redel Jones. Take into account, that for the year 2016 Los Angeles currently has the highest rate of fatal police shootings per city in the nation with a total of 10 fatal shootings. And it’s only July. Let that sink in. In conjunction, this ruling took place right after the wake of mass media coverage of the fatal shootings of Alton Sterling and Philando Castile. 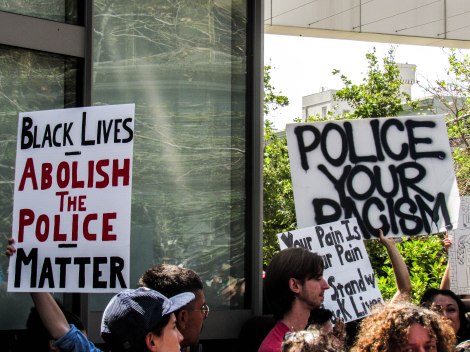 That said, it was no surprise that tensions ran high as a faction of Black Lives Matter organizers/allies were inside the hearing, as other organizers/allies met face to face with a police blockade outside the facilities during the commission ruling. The atmosphere outside the facilities was highly charged with emotional chants, speeches and poetry filling the air and waiting time. The presence was strong throughout the day of those speaking up against police brutality including previous victims of police harassment and family members of victims. 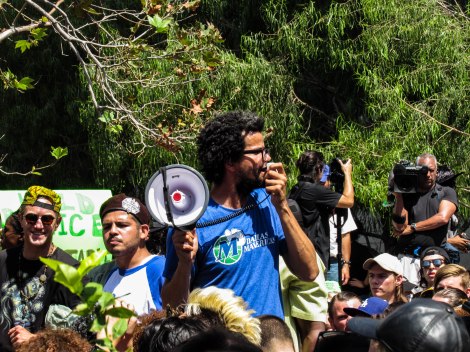 Later in the evening, it was proclaimed that the officer was cleared of the charges and ruled that his actions were in favor of LAPD policy. A woman was fatally shot and killed by a man who is supposed to be trained to protect, and it ruled in favor LAPD use-of-force policy. Again, let that sink in. In fact let that marinate in the depths of your conscience. While the case reached its closure, the erasure of justice and the exposure of more unjust systemic violences only flourished the need to continue the movement at hand. 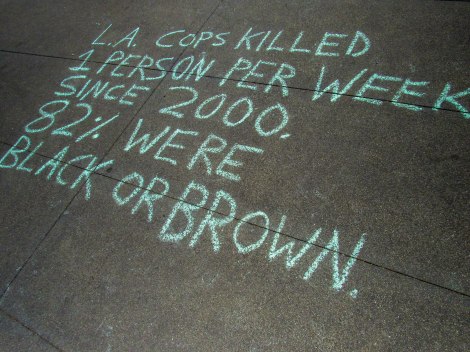 Beginning that Tuesday night, the protest took on a new form in the City of Angels. Black Lives Matter (Los Angeles) & allies begun an encampment in front of City Hall East (previously City Hall West before being relocated across the street). They are now closing in on their second week of the sit in. Their primary goal has now turned to Mayor Eric Garcetti and the demanding of Police Chief Charlie Beck to be fired. It is under the supervision of Chief Becks that Los Angeles gained its title of the highest rate of police fatal shootings in the nation. Everyday that passes without his resignation or dismissal, organizers and supporters are holding down their space, while raising up their voices. The space has been lively, full of solidarity and even hold events like teach-ins and yoga classes. Updates, as well as events, are continuously and regularly updated on their facebook and twitter accounts.

It is most essential during these trying, tragic times and highly politically charged moments, to stay critical of the environment that surrounds us. It is our active duty as citizens, and as allies, to question the social structures in place that have delegated such unequal justice. Be critical. Do not be complacent. Call out injustice if you are privileged enough to have the voice to do so. Remember that our lives begin to end the moment we decide to become silent about the things that matter. And BLACK LIVES MATTER. My heart has fallen so heavy with the weight of recent events. Marginalized communities continue to suffer at the hands of those meant to protect and serve. And frankly, we have been and are sick and tired of being sick and tired. May all bodies who have seen such injustice in their transcendence rest in power eternally. May all bodies who continue to face injustice in their life use their voice, music, art, poetry and love to make progression towards a more equitable future. 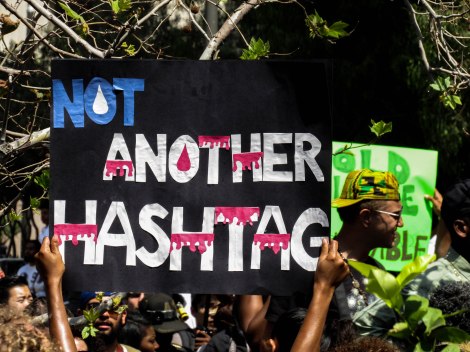 Find ways to become involved with BLM LA below, as well as how to look for your local chapter and support their unique needs: